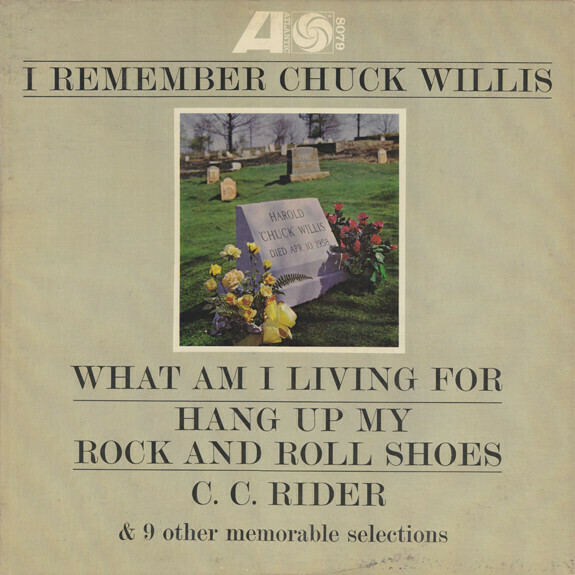 Every once in a while something happens that reminds one of the incalculable contribution Atlantic Records has made to rock and roll and rhythm and blues. From the intensely personal declaration of the album’s title to its fourteen graceful songs, all but one written by Willis himself, I Remember Chuck Willisilluminates once again the vision of the men who founded Atlantic Records and the taste and care they have shown in maintaining the spirit of their enterprise.

Chuck Willis, who died in 1958 after an extremely brief career, was known as “the King of the Stroll,” a title that referred to a Fifties dance that was popular principally because it was a good ice-breaker at parties—you had to line everyone up and switch partners to do it. News of Willis’s death was announced on Dick Clark’s American Bandstand. It seems odd to recall this vital, sensitive artist in such a way, but those were the Fifties, and those somewhat trashy events are the keys to Fifties memories, keys that, in the case of Chuck Willis, open doors to music that is as poignant and satisfying as any in rhythm and blues.

Willis’s biggest hits were “What Am I Living For” and “C.C. Rider.” On Willis’s version of the latter, rippling vibes accompanied a vocal similar to Joe Turner’s or Bob Dylan’s “Corrine, Corinna.” While Willis’s sense of the blues was close to that of Turner, he sang with a greater delicacy, with an almost fragile touch. At times, as on “Big Drops of Rain,” Willis would front an especially deft arrangement reminiscent of the Platters with the yearning and the vocal control of Clyde McPhatter. He could put laughter in his voice like Fats Domino and belt and shout like Lloyd Price. I don’t mean to imply that Willis was excessively imitative—rather it’s a matter of conveying the range of his talent. He covered the entire spectrum of early rhythm and blues in a manner that seemed effortless.

There are no poor cuts on this album, no throwaways, but Willis’ fine “(I Don’t Want To) Hang Up My Rock and Roll Shoes” [sic] is a special treat. Full of teenage blood and guts, Willis shouts out the eternal verities, saying it as well as anyone ever did: “That music’s got a beat/That will keep you alive/The kids are rock and rollin’/From eight to twenty-five!” Willis rides it on in.

As the “rock and roll revival” moves off into absurdity (even the Electric Prunes, resting up for their try at a rock version of Faust, have released a package called Good Old Rock and Roll), there are many oldies albums to choose from. Don’t hesitate. This is the one to buy first.