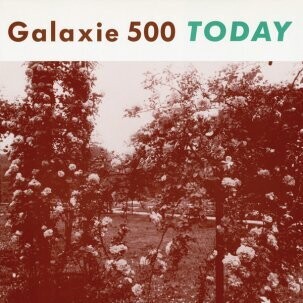 When Galaxie 500's Today was

released in 1988, it set off a chain reaction of quiet explosions still

being felt. Never before had a record so emphasized the calming elements

of rock music, transforming what at first seems like a collection of

bridges into fully realized songs. And one can draw a straight line from

here to the many groups they influenced, like Low, Belle &

Sebastian, and Bon Iver. Today is full of

idiosyncrasies. The trio of Damon Krukowski, Dean Wareham, and Naomi

Yang were recent Harvard grads who intuitively eliminated any histrionic

tradition to rock songs, leaving core emotion (not for nothing did they

include a cover of "Don't Let Our Youth Go to Waste," by the kings of

feeling, The Modern Lovers). It was produced by Mark Kramer, who was

Bongwater, Ween, and King Missle. The band's hometown of Boston was just

the spasmodic electricity of The Pixies. Despite, or perhaps because of,

all these elements, Today thrived. More

than 20 years after its initial release, its title is still no misnomer.

The music, recorded with what many thought at the time was too much

reverb, sounds present, alive, and indeed a product of today. Songs like

"Flowers," "Temperature's Rising," and of course "Tugboat" (the band's

debut single) stand the test of time and exist in an eternal now. For

the first time since its original pressing, Today is available again on

vinyl. Cut by vinyl ace Kevin Gray from a remaster by Kramer and Alan

Douches, the album sounds more vibrant than ever, and Galaxie 500 exists

the underground in the past 25 years.

* Reissue of influential indie rock band's out-of-print debut album, available on vinyl for the first time since 1988* A seminal band in the history of indie rock, often cited as the progenitors of shoegaze / slowcore, but with an influence on bands across a wide range of styles, from Stereolab to Bon Iver* Re-mastered and packaged in deluxe Stoughton tip-on jackets* Vintage Galaxie 500 LPs currently sell on eBay for $50-$80 each* Damon & Naomi DVD scheduled for release in September 2009*