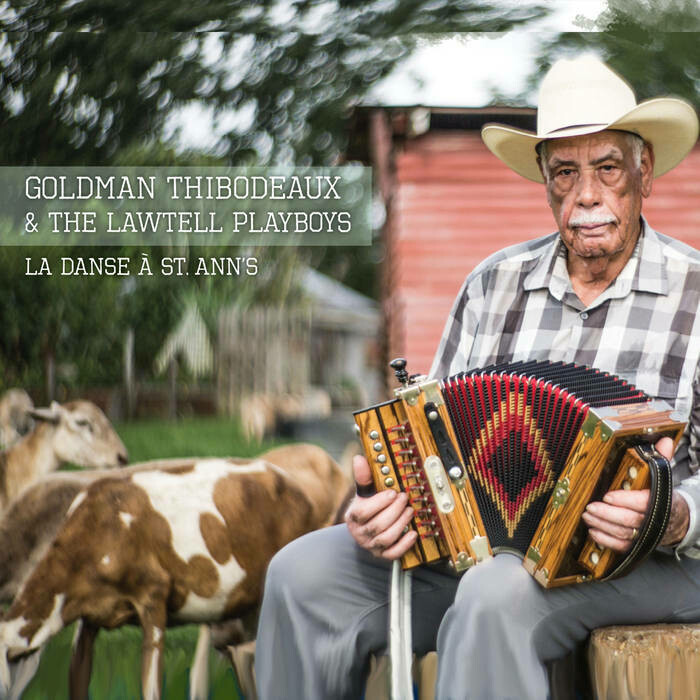 Living legend Goldman Thibodeaux, a mainstay at the New Orleans Jazz and Heritage Festival for over 20 years, is one of the last musicians performing in the traditional French Creole country style known as “La La.” Now 87-years-old, Thibodeaux’s mixed Cajun-Creole roots reach back to early 20th century Louisiana, when as a young boy he saw the great Amédé Ardoin (1898–1942) perform at a local house party. One of the most revered Creole musicians in Louisiana and an early recording artist, Ardoin’s Afro-Creole accordion style paved the way for zydeco music back in 1920s and inspired Thibodeaux to take up the accordion. By 1966, he was playing with the Lawtell Playboys, a group originally founded in 1946 by Bébé and Eraste Carriere (aka Les Frères Carrière) and kept alive by several generations of family members. Now the leader of the group, Goldman Thibodeaux and the Lawtell Playboys present their latest album, La Danse à St. Ann’s.

Recorded live at the Thibodeaux Family Reunion in November 2019, the album features the Lawtell Playboys performing for hundreds of family members in a church hall in Mallet, Louisiana. This setting takes listeners deep into the heart of the bayou, allowing them to experience firsthand a rural house party. Featured performers include Goldman Thibodeaux (accordion, vocals), Brock Thibodeaux (frottoir), Louis Michot (co-founder of Lost Bayou Ramblers on fiddle, vocals), Courtney Jeffries (acoustic guitar), Justin Leger (electric bass), Barry Cormier (drums, vocals). The Lawtell Playboys run through a variety of favorites, including traditional two-steps and waltzes plus originals such as “Blues de Golman” sung in English and Creole and “Watch That Dog.” On the final track, we briefly join the reunion as a woman attempts to organize family members for a group photo by drone in a moment that ties the past to the present.

A tireless advocate for preserving the Creole culture of Louisiana, Goldman Thibodeaux has certainly earned his living legend status. On La Danse à St. Ann’s, he draws from a century of Creole and Cajun musical traditions, combining songs passed down through generations with more contemporary originals, but never straying far from his heritage.