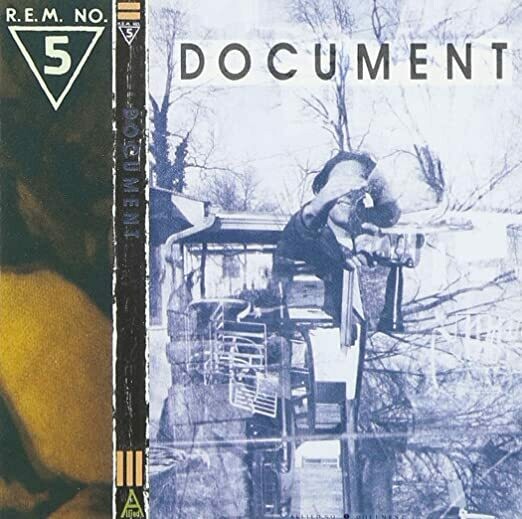 1987's "Document" is the album that put REM solidly into the mainstream of pop-rock music. I know this because the song "The One I Love", which was all over the radio and MTV, was the first REM song that entered my consciousness. Oddly enough, although through the years I purchased 6 REM albums, I never got around to this one until now. From the first notes of the first track "Finest Worksong", I can see why people sat up and took notice. More rock than folk or pop, it is a dynamic opener and fairly representative of the album as a whole. Every facet of the album is excellent: the vocals (including harmonies and backups), the bass, the drumming and especially the guitar. What a variety of guitar sounds! Many tracks feature REM's trademark jangly guitar, but there are other styles to notice as well. "Finest Worksong" features one repeated note for much of the track, sounding like a Morse Code alert. There are bluesy guitar interludes in "Exhuming McCarthy". "Lightnin' Hopkins" is basically an older style rock song, and the guitar in places tends more toward glam. And in "Oddfellows Local 151", the typical jangly style alternates with moments that I can only call "grungy", even though this album predates grunge as a separate genre. Apart from guitar delights, "Fireplace" makes unusual and effective use of a saxophone, something not heard on too many REM tracks. I don't think the production and musical arrangements of these tracks could have been much better than they are.

In a way I am happy that I didn't discover this album until now. The lyrics contain political references that seem appropriate today, even though meant to apply 30 years ago. Of course, different people will interpret them differently, depending on which side of the political spectrum you identify with. "Finest Worksong" announces, "The time to rise has been engaged/You'd better best to rearrange...What we want and what we need/Has been confused". In "Welcome To The Occupation", we find, "Hang your freedom higher/Listen to the buyer still/Listen to the Congress/Where we propagate confusion...Where we open up the floodgates/Freedom reigns supreme". "Exhuming McCarthy" is obviously referring to the early 50's anti-communist hearings, but one line, not loud but sung as a backup line several times, makes me stop and think: "...meet me at the book burning". In the light of certain recent events, book burning in the USA does not seem that impossible. And while we're on that song, how about this: "Vested interest, United ties...By jingo, buy America". "Disturbance At The Heron House" reports "They're going wild, the call came in/The followers of chaos, out of control...A meeting of a mean idea to hold". And in the speed-talking anthem "It's The End Of The World As We Know It", there are lines that are pretty obscure but again, they make me go "Hmmm...": "Team by team reporters baffled, trump, tethered crop...Save yourself, serve yourself/World serves its own needs, listen to your heart bleed/Tell me with the rapture and the rev-'rent in the right, right". I'm not sure what REM meant at the time, but it seems to have contemporary relevance to me, sort of like a prophecy of Nostradamus.

This album initiated a wave of popularity that made REM probably the biggest American band for about the next 7 or 8 years, and surpassed only by Ireland's U2.