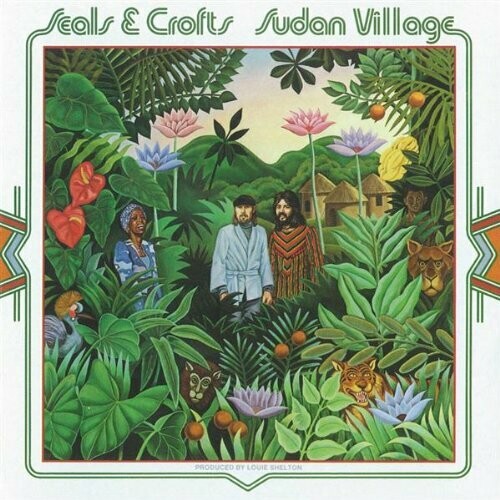 Sudan Village is a live album by Seals & Crofts. It features the single "Baby I'll Give It to You", which reached #58 on Billboard's charts.

"Sudan Village", this so-called 'live' album from Seals & Crofts, often sounds more like a studio release with audience noise mixed in. The album opening title track makes it obvious from the get-go, as you can even hear Jim Seals' voice being multi-tracked.


It seems to me that with this album, Seals & Crofts had a couple clear goals in mind--recreate and showcase some of their personal favorites from their catalog; and use up some material that they had yet to include on album--and that the disguise of a live album was an ideal way to do these things. Just look at the track selection... "Hummingbird", "Summer Breeze", "Diamond Girl", "We May Never Pass This Way (Again)", "I'll Play For You", "Get Closer"--absolutely none of them are here. There isn't even a single track played from the "Get Closer" album which had come out earlier the same year this album did (1976).

Instead, we are actually supplied with a lot of new material, such as the long, highly enjoyable fusion-esque instrumental "Thunderfoot" (with its memorable main riff), and a couple pop-rockers with "Put Your Love In My Hands" and the gospel-tinged "Baby I'll Give It To You", the latter of which was released as a single although it just barely scraped the charts and indeed does sound dull and by-numbers (not to mention like it was completely recorded in the studio).

Even on album tracks that Seals & Crofts incorporate into the playlist, such as the title track and "'Cause You Love" (both originally from 1971's "Year Of Sunday), the arrangements are brought 'up to date', emphasizing the soft rock slant of their concurrent studio work and losing the folk rock flavor of their respective studio originals. It works to great effect on the title track, but "'Cause You Love" comes off considerably less effectively, sounding murky despite the presence of Carolyn Willis (who had previously sung on "Get Closer").

And just to make it clear, at least SOME of the album sounds like it's genuinely live. There is some entertaining spoken banter with the audience, especially from Dash, who seems to have been pretty animated on stage. Plus, the album ends with the hoedown/ fiddle routine which was a signature of their concerts and very much an audience participation segment. So, capturing at least some of the essence of a Seals & Crofts live show was certainly not off the list of considerations that the guys had.

Seals & Crofts probably owed Warner Brothers a live album as part of their contract, and the guys deserve a lot of credit for not just churning out a boring, passionless retread of their biggest hits. This is a highly intriguing variation on the usual 'live album format', definitely of interest to fans. Still, with weaker material cluttering up proceedings ("Baby I'll Give It To You", "East of Ginger Trees"), prime material being rendered in so-so fashion ("'Cause You Love"), and the whole fiddle showcase not being the kind of thing you want to listen to that often (probably a lot more entertaining in person), the album overall can't be considered an unqualified success.
Save this product for later
Display prices in: USD