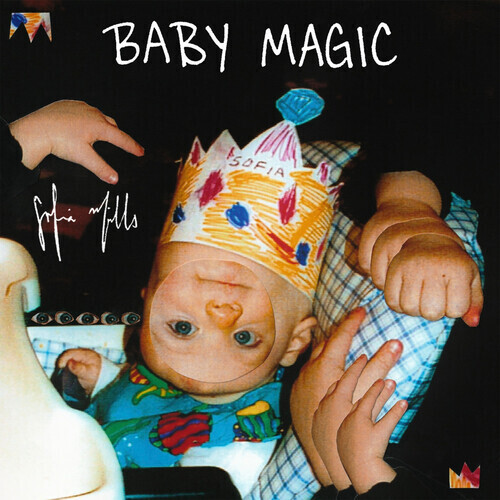 SKU 400000344669
$19.98
In stock
1
Product Details
The debut album from 19-year-old artist Sofia Mills, Baby Magic intimately details the most pivotal moments in her coming-of-age experience: breakups with toxic boyfriends, coming out as queer at age 16, a longtime struggle with mental illness. As shown on her breakthrough single "Coffee Breath" (a self-produced track that's amassed over 90 million streams on Spotify to date), the Massachusetts-born singer/songwriter/multi-instrumentalist imbues her storytelling with both startling clarity and profound sensitivity, an element echoed in her warmly textured brand of indie-pop. Written entirely by Mills and co-produced with John Mark Nelson (Taylor Swift, Allison Ponthier), Baby Magic arrives as a complex and captivating body of work, built on a potent tension between her dreamy romanticism and intense self-awareness. "I tend to glorify a lot of the bad relationships I've had, and make them into something beautiful when they're really not-so the heartbreak I feel comes from losing the beauty I created in my own mind," Mills reveals. "And then with songwriting, I get to look back and analyze all that and see the relationship for what it was, which is what allows me to actually move on." Now based in Los Angeles, Mills grew up singing in the church choir in the small town of Rockport and started studying piano as a little kid, then taught herself to play guitar in fifth grade. "I'm not disciplined enough for lessons, but I've always been able to figure things out by ear," says Mills, who was raised on the soul and R&B and jazz artists her parents played at home. After getting her start writing poetry, she began creating her own songs as a sophomore in high school, the same year she spent several weeks in psychiatric treatment at McLean Hospital near Boston. "It was definitely one of the most transformative periods of my life," says Mills, who was treated for an anxiety disorder called emetophobia. "I was so used to being the weird girl who had to go to the nurse's office six times a day because I was so anxious all the time, but being at McLean really opened me up to other people's experiences and changed my whole perspective." Within the next year, Mills had posted her first batch of songs on SoundCloud and found viral success on TikTok with "Coffee Breath," a track she wrote on ukulele over Christmas break and recorded with a $13 microphone from RadioShack. "I put it on TikTok not really thinking anyone would listen to it, but it started picking up streams and eventually got to a million a month," she recalls. "Up until that point I'd thought music was a pipe dream, but seeing the reaction to 'Coffee Breath' made me realize what I had the potential to do." Soon after releasing her 2020 debut EP All My Pals, Mills was chosen for the 2021 "First on SoundCloud" campaign-an artist-accelerator program that led to such endeavors as collaborating with award-winning director Christina Xing for her first-ever music video, the cinematic visual for her soul-baring single "Life of the Party." Mixed by Jim Eno of Spoon, Baby Magic takes it's title from a gorgeously aching track graced with the delicate string work of composer Rob Moose (Phoebe Bridgers, Perfume Genius), a stunning backdrop to Mills's self-revelation. "There was a girl at the psych ward who was an artist and the coolest person I'd ever met," says Mills of the song's inspiration. "We would have drawing nights where we'd all draw our feelings on one big piece of paper, and one night she drew a baby-doll head and wrote 'Baby Magic' on it. To me that phrase captures the whole essence of the album, which has a lot to do with yearning for the magic of being younger." Noting that much of Baby Magic speaks to her experience in "dating the worst boys in the world," Mills ruminates on destructive relationship patterns on the heavy-hearted but quietly hopeful "Wish I Would." "That song's talking about the fact that I'm growing up and at some point I'm going to start making decisions that are actually good for me-but just not right now," she says. And on "Bite," Baby Magic takes on a fantastically brash energy as Mills presents her brilliant solution to a beloved friend's own romantic drama. "'Bite" was born out of the frustration of watching a friend date someone horrible and immature, but I wanted to put a fun twist on it," she says. "So instead of just telling her to stop dating him, the song's saying, 'Stop dating him, and come be with me.'" Naming Taylor Swift, true-crime podcasts, and poets like E. E. Cummings among her many inspirations, Mills typically creates her songs in stream-of-consciousness bursts, a spontaneous process she likens to writing in a diary. "Nostalgia's my best friend when I'm writing songs," she says. "They're always about something sad, but it's good because at least it's somewhere for the sadness to go." And with the release of Baby Magic, Mills hopes that outpouring might positively impact her listeners. "I feel like I've already built an amazing community with my audience, and I want to be a big sister to all of them," she says. "I want them to know that boys aren't everything and you can be happy without a relationship and there's a standard for how you should be treated-and I think all that starts with being totally honest about everything I've been through."
Save this product for later
Display prices in: USD