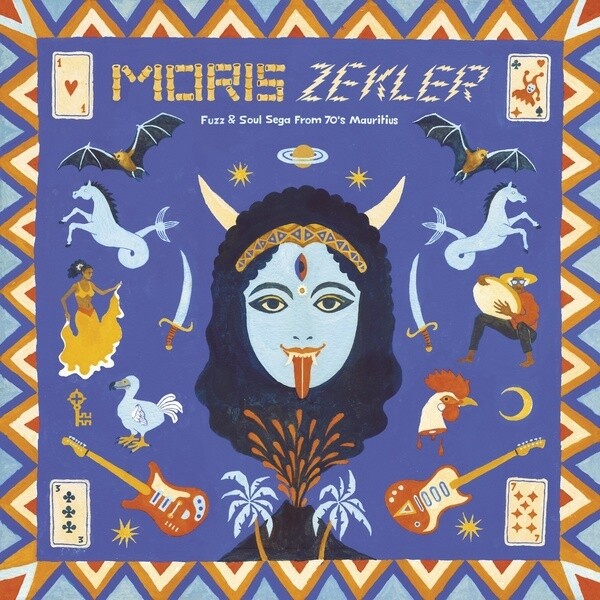 LP version. Includes six-page booklet and download code. A tax haven and dream destination for wealthy travelers, the Republic of Mauritius is a multi-ethnic country that is currently experiencing full economic and social ascension. Banking, textile, tech, tourism industries... in this fast-paced melting pot, business is strong. But not too far from the heavenly beaches and luxurious hotels are quasi-shantytowns, reminding us that a large part of the population, often Creole (of Afro-Malagasy origin) are still excluded from the "economic miracle of Mauritius." These Creoles are mostly descendants of slaves who were deported in mass in the eighteenth and nineteenth centuries from Madagascar and the East African coast for the cultivation of spices and coffee and later sugar cane. On the margins of these hellish plantations was secretly created a music called tchiega, chéga or tsiega, a distant cousin of the blues. The music from Mauritius in the '70s found on this compilation naturally evolved from this original sega. Created at the crossroads of Afro-Malagasy, Western and Indian cultures, pop, soul and funk arrangements, syncopated ternary polyrhythms, saturated guitars, psychedelic organs and Creole vocals, this musical phenomenon is as incredible as a tropical flower in bloom. Although the origins of sega remain quite unknown, it is known that it contains vocal and percussive practices that originated from Madagascar, Mozambique, and East Africa. A social escape and a space for improvisation, satire, and verbal jousting, it transcended everyday life and made room for the expression of conflicts and the transgression of taboos. Inseparable from dance, sega is thus exposed as part of a pair: bodies brush against each other, stare at each other, get excited but never touch each other. The main instrument of sega is the ravanne, a large tambourine-like drum made of a large wooden frame and goat skin. It is accompanied by the maravanne, a rectangular rattle filled with seeds, and also often by a triangle, a bottle, a machete or any metal object that can be hit with a stick. Features Harold Berty, Ti L'Afrique, Claudio Veeraragoo, Paul Labonne, Georges Gabriel, The Features Of Life, Roland Fatime, Jean Claude Gaspard, Jos Henri, Coulouce, John Kenneth Nelson, Lelou Menwar, and Daniel Delord.