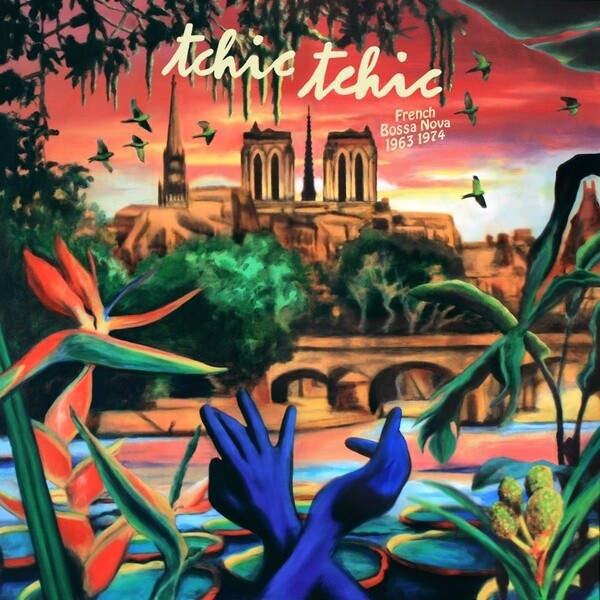 Double LP version. Includes printed undersleeve and download code. Ever since the late 1950s bossa-nova revolution, Brazil's influence on French music has been undeniable. Pierre Barouh, Georges Moustaki, and a vast array of lesser known artists, all made the Musica Popular Brasileira (MPB) an axis of promotion at the service of a cool and metaphysical, modern and mixed Brazilian lifestyle. Some were seduced by the poetic languor of the bossa, some were looking for fun, and others just loved the American hybridization of jazz-bossa, jazz-samba. With emotion, arrangements for violin and supple guitar licks, bossa nova rapidly changed. A transformation that can be heard in the Tchic Tchic: French Bossa Nova 1963-1974 compilation, the result of a cultural reappropriation, which traveled through the United States and supplemented itself in France. A musical revolution that has remained significant, bossa nova was born in Rio. From 1956 to 1961, Brazil lived through its golden years. In five years, the country had invented its modernist style. American jazzmen then took over. In particular, trumpeter Dizzy Gillespieand guitarist Charlie Byrd. In November 1962, the Brazilian Ministry of Foreign Affairs funded a "Bossa-Nova" concert at Carnegie Hall in New York, inviting the genre's pioneers. In Brazil, the 1964 military coup quickly ended this euphoria. The destructive atmosphere that ensued pushed many Brazilian musicians to leave, if not to exile. Thus, Tom Jobim, Sergio Mendes, and Joao Gilberto arrived to the United States. In New York, Joao Gilberto met saxophonist Stan Getz. At the time, he was married to the Bahianese Astrud Weinert Gilberto, who had a German father. She had never sung before, but she knew how to speak English. Getz therefore asked her to replace her husband on "The Girl From Ipanema". The Getz/Gilberto record with Tom Jobim on piano, was released in March 1964. Phil Ramone, the "pope of pop" was in charge of sound. Bossa nova arrived in Paris through the classic "guitar-voice" channel. But France loved jazz and Paris had already welcomed its American contributors. Features Les Masques, Isabelle Aubret, Christianne Legrand, Jean Constantin, Billy Nencioli & Baden Powell, Marpessa Dawn, Jean-Pierre Sabar, Sophia Loren, Isabelle, Sylvia Fels, Frank Gérard, Ann Sorel, Charles Level, Andrea Parisy, Audrey Arno, Aldo Frank, Clarinha, Hit Parade des Enfants, Jean-Pierre Lang, Magalie Noël, and Françoise Legrand.