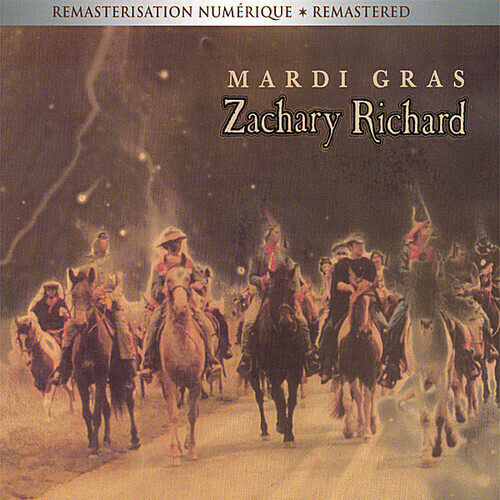 Singer-songwriter and poet, Zachary Richard (pronounced Ree-shard) was born and raised in Southwest Louisiana. His music is influenced by the styles typical of the region: Cajun, Zydeco and New Orleans rhythm and blues. But, Zachary has always gone beyond the limitations of any particular style. With his latest album Lumière dans le noir (Light in the dark-2007), Zachary Richard goes deeper into his own unique musical universe. Zachary Richard began his musical career at the age of 8 years. As first soprano of the Bishop's Boys Choir at Saint John's Cathedral in Lafayette Louisiana, he discovered his love for singing. After a university career distinguished mostly by the composition of his first songs and resistance to the war in Viet Nam, Zachary moved to New York City. It was there that he obtained his first recording contract in 1972. His first album, High Time, was recorded at the Record Plant with the crême de la crême of New York session musicians. The album was never released, forgotten for nearly 30 years in the vaults of Electra Records until rediscovered in 2000 by Rhino Records. Leaving New York in 1973, Zachary went to France, accompanied by his musical partner, Michael Doucet.. It was in France that Zachary found an audience, and discovered his roots. Zachary Richard grew up in a typical Cajun family. He learned to speak French from his grandparents, who were of the last generation of French speakers in Louisiana. The Cajun musical tradition and native Louisiana French would have a tremendous influence on his career. Completely bilingual, Zachary Richard composes both in English and in French. While grounded in Louisiana tradition, Zachary has been able to forge for himself a unique and uniquely personal voice. From 1976 until 1981, Zachary lived in Montreal, recording seven albums (including two « gold » albums) which melded his Cajun roots with modern folk-rock.. These albums are the seminal Cajun recordings of the post modern period: Bayou des Mystères, Mardi Gras, Migration, Allons Danser, Live in Montreal, Vent d'Été and Zack Attack. In 2007, these albums were digitally remastered from the original analog masters and re-released In the mid1980s, Zachary returned to Louisiana andbegan another phase of his career, recording in English. After two albums for Rounder Records,Mardi Gras Mambo, and the perennial favorite Zack's Bon Ton, Zachary signed with A&M, recording two albums back to back, Women in the Room and Snake Bite Love. Non-stop touring and the strength of these recordings guaranteed Zachary an international following. In 1994, Zachary appeared at the Congrès Mondial Acadien (Acadian World Congress), in New Brunswick, his first Canadian appearance in over six years. That experience affected him deeply. Returning to his French language, Zachary recorded his most successful album to date, the double platinum Cap Enragé . He had swung full circle reestablishing himself as a prominent singer-songwriter in both Canada and France. Coeur Fidèle (Faithful Heart) was released in 2000. Zachary Richard is a poet as well as a songwriter. His second collection of French language poetry, Faire Récolte (Make Harvest) (Perce Neige, Moncton, 1998) received the Prix Champlain, in recognition of his « considerable contribution » to the French language literature of North America. In his latest collection of poetry, Feu (Fire) ( Les Intouchables, Montreal, 1999) Zachary plunges deeper into the question of francophone identity in NRichard, Zachary : Mardi Gras